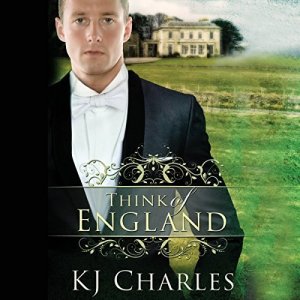 Lie back and think of England…

England, 1904. Two years ago, Captain Archie Curtis lost his friends, fingers, and future to a terrible military accident. Alone, purposeless, and angry, Curtis is determined to discover if he and his comrades were the victims of fate, or of sabotage.

Curtis’s search takes him to an isolated, ultra-modern country house, where he meets and instantly clashes with fellow guest Daniel da Silva. Effete, decadent, foreign, and all-too-obviously queer, the sophisticated poet is everything the straightforward British officer fears and distrusts.

As events unfold, Curtis realizes that Daniel has his own secret intentions. And there’s something else they share – a mounting sexual tension that leaves Curtis reeling.

As the house party’s elegant facade cracks to reveal treachery, blackmail, and murder, Curtis finds himself needing clever, dark-eyed Daniel as he has never needed a man before…

I’ve been eagerly awaiting the release of Think of England ever since I learned that Audible Studios was going to be releasing a number of K.J. Charles’ backlist titles in audio. It’s one of my favourite books of hers (one of my favourite books, full-stop, actually) and while I admit to a bit of trepidation when I saw that an unknown narrator had been used, I’m pleased to be able to say that on the whole, Tom Carter does a pretty good job.

The story is set in 1904, and opens with former army captain Archie Curtis arriving at Peakholme, near Newcastle, for a house-party given by Sir Hubert Armstrong, a wealthy industrialist. Curtis was invalided out of the army after losing three fingers and sustaining a serious knee injury at Jacobsdal in South Africa, occasioned when a faulty batch of guns backfired and exploded, also maiming and killing a number of his men.

You can read the rest of this review at AudioGals

One thought on “Think of England by K.J. Charles (audiobook) – Narrated by Tom Carter”