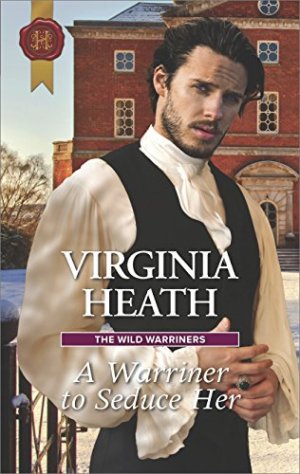 Awakened by the notorious rake!

In this The Wild Warriners story, schoolmistress Felicity Blunt feels old beyond her years―and desperately dull. Meeting confirmed rake Jacob Warriner brings her gloriously alive, and yet no matter his allure she must remain immune to his obvious charms and unashamed flirtation. But is Jacob merely a mischievous scoundrel? Or is there much more to this Warriner than meets the eye…?

This final book in Virginia Heath’s thoroughly enjoyable series featuring the four Warriner brothers focuses on the youngest, Jacob – or Jake, as he is more commonly known.  We’ve met him in the previous books in the series, and unlike his siblings – Jack, the Earl of Markham and head of the family, Jamie, a former soldier and Joe, a doctor – he’s a bit of a wastrel and spends most of his time amid the hedonistic delights of London, where he’s acquired quite the reputation as a ladies’ man.

Ms. Heath has dropped the odd subtle hint that there’s more to Jake than meets the eye, and in A Warriner to Seduce Her, we find out exactly what that is.  While his brothers eye him with fond exasperation and despair of his ever marrying and settling down, the truth is that Jake was recruited by the British Government when he left Cambridge and has been working for them ever since.  A member of a small team known as the King’s Elite, Jake and his colleagues have been tasked with discovering the identity of the man behind a large-scale smuggling operation that is trying to destabilise the British economy by flooding the market with illegal goods and channelling funds to an organisation determined to return Napoléon from exile.  But in spite of their best efforts, the identity of the lynch-pin remains as elusive as ever.

The last few months have been exhausting and Jake is looking forward to heading home to Markham Manor for some well-earned leave.  He’ tired, he misses his family a great deal and longs for:

Three months of being himself, no hidden agendas, no danger, no responsibilities and no web of lies.

… and feels keenly the gulf that has opened between himself and his brothers in recent years because of the secrets he has to keep.  So he’s none too pleased when his boss tells him that his leave is cancelled because there’s a new lead in their search for the boss of the smuggling ring.  Suspicion has fallen upon Lord Crispin Rowley, whose fortunes have recently taken  a sudden and unexpected upturn – and Jake is tasked with the seduction of Rowley’s niece, a country miss fresh out of Sister Ursuline’s School for Wayward Girls in Cumbria who will surely be an easy target for his masculine charms.

The letter summoning twenty-five-year-old schoolmistress Felicity Blunt to London came completely out of the blue.  It seems that her uncle, Lord Crispin Rowley, had finally decided to fulfil the promise he made her dying mother to give Fliss a Season – but she isn’t interested.  She doesn’t want a Season and she doesn’t want a husband, but Sister Ursuline insists she should travel to London and have an adventure – which has, so far, proved to be a huge disappointment.  Rowley hasn’t taken Fliss anywhere she wants to go, insisting instead on dragging her to boring balls and parties, but being leered at and squinting at blurry figures (Rowley insists she leave off her spectacles) from the sidelines of a ballroom isn’t exactly the type of adventure she had in mind.

Jake is pleasantly surprised when he discovers that the lovely woman he’d been observing from his vantage point at the edge of the ballroom at Almack’s is none other than the woman he’s been instructed to seduce.  He’d been expecting a dowdy, nunnish-type, not a lush beauty with honey-gold hair, a spectacular figure and a dry sense of humour, who is nowhere near as impressionable as he’d been led to believe.  They converse amiably for a short while, until Jake, still tired and annoyed at the cancellation of his leave, makes a misstep and attempts to soften her up too quickly. Fliss’ warm, friendly manner evaporates and she makes it clear she’s seen through Jake’s practiced charm and hackneyed compliments and has no further interest in conversing with him.

Jake is – reluctantly – impressed.  And intrigued.  And just a bit ashamed. For the first time, he feels an element of distaste about the fact that he uses sex as a means to extract information – although he can’t allow himself to dwell on it as he still has a job to do.  Fliss’ summary dismissal of him may have stirred the first genuine interest he’s felt in a woman in years, but he can’t lose sight of his mission; so over the next few days, he contrives to encounter her on several occasions in an attempt to wear down her resistance and to see what she can be induced to tell him about her uncle.

Fliss can’t deny that she’s been attracted to Jake since the first time they met, but she’s not interested in charming, sexy and gorgeous, she wants respectable and dependable.  She is determined to steer clear of him, but somehow, he’s always there when she needs help, and keeps turning up at the social events her uncle insists she attend… and the more time she spends with Jake, the more Fliss can’t help liking him.  She sees something – very occasionally – behind the suave, rakish façade that interests her, the possibility that there lies a man of more substance than he is willing to reveal to the world; he’s amusing, self-deprecating and genuinely charming, and she can’t help falling for him.

Jake is similarly smitten, finding Fliss’ lack of artifice totally refreshing and admiring her honesty – she’s “Blunt by name and blunt by nature” – even if it is a but brutal at times.  He finds it harder and harder to reconcile his growing feelings for her with his instructions to use her in order to get close to her uncle, but Rowley is obviously up to his neck in something both nefarious and dangerous, and Jake has no choice but to continue with his deception.

One of the many things I’ve really enjoyed about all the books in the Wild Warriners series is the family dynamic the author has created between the brothers.  They’ve not had it easy, courtesy of generations of scandalous, spendthrift relatives, and until recently, they’ve struggled to make ends meet – yet the love they bear towards each other is unstinting and permeates all their scenes together.  In the book’s prologue, we learn of a long-buried and painful secret Jake has carried since childhood, which has set him apart from his brothers to an extent and has obviously shaped the man he has become.  Ms. Heath doesn’t allow it to turn Jake into one of those ‘woe-is-me’ overly brooding types, but it has obviously informed many of his choices as an adult, and she very skilfully brings us full-circle towards the end of the novel as Fliss and Jake’s brothers finally help him to overcome it and put it to rest.

Boasting a strong plotline, two attractive central characters with scorching chemistry and a wonderful cast of secondary characters, A Warriner to Seduce Her is a superb end to an excellent series, and is the third (or fourth?) novel of Ms. Heath’s to grace my Keeper shelf.  And there’s more good news;  her next series, featuring Jake’s colleagues from the King’s Elite, is on the way – I can’t wait to meet The Mysterious Lord Millcroft in August.