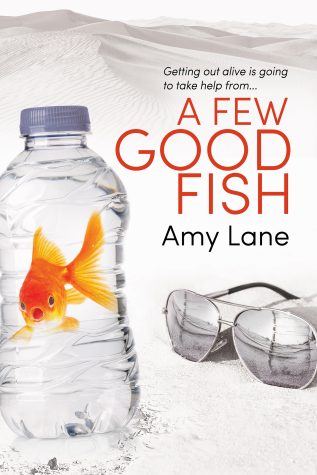 A tomcat, a psychopath, and a psychic walk into the desert to rescue the men they love…. Can everybody make it out with their skin intact?

But their previous investigation poked a new danger with a stick, forcing Jackson and Ellery to leave town so they can meet the snake in its den.

Jackson Rivers grew up with the mean streets as a classroom and he learned a long time ago not to give a damn about his own life. But he gets a whole new education when the enemy takes Ellery. The man who pulled his shattered pieces from darkness and stitched them back together again is in trouble, and Jackson’s only chance to save him rests in the hands of fragile allies he barely knows.

It’s going to take a little bit of luck to get these Few Good Fish out alive!

Amy Lane’s Fish Out of Water has quickly become one of my favourite romantic suspense series, mostly because I adore the two central characters, but also because the books are gritty, tightly plotted, sexy thrillers with intriguing storylines, plenty of snark and a large helping of angst.  It’s like they were written just for me 😛  A Few Good Fish is the third instalment and if you pick it up without having read Fish Out of Water and Red Fish, Dead Fish, you’re likely to be a bit confused.  The books need to be read in order as there are overarching plotlines that reach a climax here, and while there’s some backstory given, readers will get far more out of A Few Good Fish if they’re familiar with the Story So Far.  Plus, the romance between hard-boiled PI Jackson Rivers and buttoned-up defence attorney Ellery Cramer begins in book one, and it’s important to understand where they’ve come from in order to fully appreciate where their relationship is now.

Spoilers ahead for the first two books.

When, in Fish Out of Water, Jackson Rivers’ brother, Kaden, is framed for the murder of a police officer, Jackson reaches out to defence attorney Ellery Cramer, insisting he’s Kaden’s best chance of beating a murder charge.  Jackson works as the PI for the defence firm where Ellery is the hot-shot up-and-comer, and while he makes no bones about the fact he thinks Ellery has a stick up his ass, he also knows the guy is cool under pressure, can take apart a witness like nobody else and that he’ll get the job done.  As the pair investigates and digs deep, they uncover links to police corruption going back years – back, in fact, to the time when Jackson, then a rookie cop, was shot and almost killed because he was a part of an investigation into that corruption.  Working together so closely also allows them to explore the attraction building between them; their sexual chemistry is off-the-charts, and Ms. Lane also adds a strong emotional dimension to their relationship, making it clear from the start that what’s between these two is much more than no-strings stress relief.

Although there’s a satisfactory conclusion to the main plotline, there are loose ends left over for Red Fish, Dead Fish, when a crazed killer – Tim Owens – who was part of the police corruption ring, brings things up close and personal for Jackson in a truly horrifying way.  It emerges that Owens is ex-military, and was part of some sort of secret program designed to train already violent, unstable men to become sadistic, psychopathic killers – and that Owens was just one of many put through it.

In A Few Good Fish, Ellery is set to defend a young woman accused of a hit-and-run killing.  Nanny Janie Isaacson had taken her charges to school, then stopped further along the road to allow someone to cross when a speeding “big blue… government car”  overtook her and hit and killed a pedestrian.  The driver then approached Janie and threatened her before driving away, and her description of the man makes Ellery’s blood run cold.  It fits Commander Karl Lacey, whom he’d questioned months earlier during the Tim Owens case – but why is Lacey in Sacramento when his base is miles away in Southern California?

Jackson and Ellery know they rattled some fairly dangerous cages by questioning Lacey and have been expecting repercussions… although they can’t deny they’d have liked a bit more peace, quiet and normalcy, time for Jackson to properly heal from his most recent injuries and for them to continue to adjust to life as a couple (which still freaks Jackson out).  When Jackson catches a kid trying to plant a tracker on their car, and then they find out that their home has been bugged, they realise they need to bring in reinforcements if they’re to gather the evidence and information they need in order to bring Lacey’s activities to the attention of the authorities who can close him down. Ace Aitcheson and Sonny Daye (from Racing for the Sun), both had dealings with Lacey and his methods, and are now living well under the radar in a tiny town in the middle of the desert.  Ellery and Jackson must drop off the grid to avoid detection by the bad guys while they continue to investigate; but the stakes are raised when Ellery and Ace are taken by Lacey’s men, and Jackson and Sonny find themselves having to do more than just recon and information gathering.

I’ve been looking forward to this third instalment in the series ever since I finished the second, and it definitely didn’t disappoint. I could wish Jackson got to have a bit more recovery time between injuries (his three-legged bruiser of a tomcat Billy Bob might have nine lives, but Jackson doesn’t!), but that’s a minor gripe; A Few Good Fish is a riveting page-turner with high-stakes action scenes, an intriguing plot and two compelling, incredibly likeable central characters.

I said at the beginning that one of things I love about the series is the central couple, and Jackson and Ellery have become one of my favourite romantic pairings.  Jackson – who had a truly shitty childhood, has PTSD as a result of the shooting and is a mass of insecurities beneath the good-looks and charm – is so broken and yet so deserving of love, and Ellery wants badly to shoulder some of his burdens and give him that love – but Jackson is like Billy Bob; prickly and hard to get close to. His mother’s abandonment has translated into a tendency to push people away before they can leave him, but fortunately for Jackson, Ellery is tenacious and insightful; it’s clear early on that he’s got Jackson’s number and isn’t about to let him pull any of his usual crap.  Life has prepared Jackson only for the fact that he doesn’t deserve the good stuff, and he finds it difficult to accept that someone like Ellery – rich, well-adjusted and successful – truly wants to be with him.  But by the time A Few Good Fish opens, Jackson has begun to hope – cautiously – that life isn’t going to crap on him all the time. He and Ellery are living together as a couple and he’s got used to the idea that Ellery actually wants to ‘keep him’.  He’s grumpy and awkwardly sweet on occasion, and I love watching him gradually opening himself up to Ellery and letting him know him.  Ellery is the more straightforward character of the two, and on occasion, he’s overshadowed by the force of nature that is Jackson Rivers, but he’s very much Ying to Jackson’s Yang, and the two complement each other perfectly. Plus – Jackson enjoys Ellery’s bossy streak 😉 There are some great secondary characters – notably the feisty Jade (Jackson’s former girlfriend) and Ellery’s formidable mother; plus Ace and Sonny and a new – and intriguing – couple I believe will feature in a companion novella at some point.

While this particular case is closed, Ms. Lane seems to be paving the way for more Fish stories, and I’ll be there to snap them up.

Oh, and one more thing.  Best. Resignation Letter. Ever. *wink*