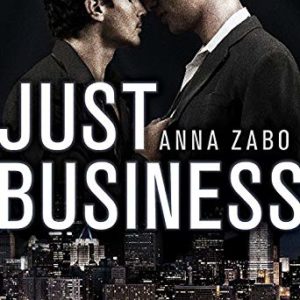 Justin White may not look like an up-and-coming corporate superstar, but his new boss knows that he has the smarts, grit, and determination to succeed. Now he just has to convince his company’s CFO, Eli Ovadia. Unfortunately, Justin can’t seem to keep his cool around the domineering Eli, and soon he finds himself taking their heat from the boardroom into the bedroom.

Still haunted by a tragic accident that left him with a wounded leg and broken heart, Eli has a need to be in control. But his desire for Justin makes him want to lose that control and push them both far beyond their limits. Will his need to dominate Justin drive him away, or will Eli find a way to be the man he needs for both of them?

Anna Zabo is a new-to-me author, and I picked up Just Business (book two in the Takeover series) because I’m on a narrator glom (and it was in the Audible Romance Package). It’s a steamy, BDSM-themed romance, and to be honest, isn’t something I’d likely have chosen to read or listen to had it not been for the fact that I’d happily listen to Iggy Toma announcing arrivals and departures at Waterloo station.

Justin White is a clever, ambitious young man studying for his MBA and working as a barista in order to make ends meet. One of his regular customers is Sam Anderson, the CEO of a small but dynamic consulting firm – and Justin has overheard him talking with his friend and colleague, Eli Ovadia, about the fact that he needs to hire a new assistant. Justin is barely keeping his head above water financially, between helping his family, his tuition and living expenses, and he really wants the job; he has the right education and experience and knows he could do a lot worse than learn how to run a business from Sam Anderson – so he gathers his courage and hands Sam the application he’s prepared. He’s invited for an interview and gets the job.