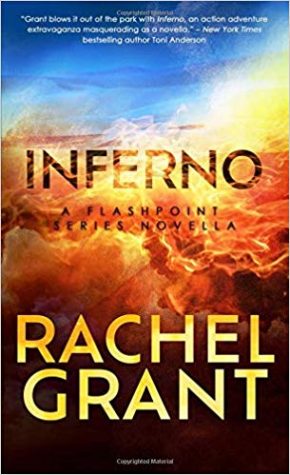 US Embassy Officer Kaylea Halpert needs a date for a black tie event at a dangerous foreign national’s lavish home. Preferably someone with brains and brawn who can watch her back. Special Forces Sergeant Carlos Espinosa is more than happy to escort the beautiful, brilliant diplomat—who just might be a CIA case officer—to the party. Their night together only gets hotter when he discovers Kaylea burns for him too.

Date night in Djibouti turns deadly when foreign agents target the couple. But who is the intended victim, the covert operator or the Green Beret? As Carlos and Kaylea use their combined skills to escape their captors, they uncover treachery that could ignite relations between the US and Djibouti—already at a flashpoint—and trigger an inferno.

Rachel Grant’s recent Flashpoint series of romantic suspense novels set in and around the Horn of Africa is one of my favourites in the genre; fast-paced, action-packed, sexy and incredibly politically astute and informative, they’ve pretty much ruined me for all other romantic suspense stories!  So I may just have squeeed a little when I learned the series wasn’t quite over, and the author was publishing a novella featuring two of its main secondary characters, US diplomat (and CIA Case Officer) Kaylea Halpert and Sergeant First Class Carlos Espinosa, another member of the team of special forces operatives based at Camp Citron in Djiboutu.

When Kaylea learns she’s been invited to a party being hosted by Saudi businessman Sheikh Rashid bin Abdul al-Farooq, she isn’t keen on attending.  Al Farooq has only recently emerged as a player on the political stage in the region; backed by the Russian Bratva, he’s positioning himself as a philanthropist and benefactor to Djibouti, and Kaylea is concerned that the traitor Seth Olsen (Firestorm), whom Al Farooq met recently, may have blown her cover and revealed her to be a CIA agent.  In addition, the man has taken a personal interest in her that Kaylea finds worrisome, to say the least.  Seeing her unease, one of her colleagues suggests she takes a date to the party – which gives Kaylea an idea.  She needs someone to watch her back who won’t be easily intimidated – and who won’t shy away from being intimidating if necessary – and who better than one of the Special Forces guys from Camp Citron?  And if that guy just happens to be a certain gorgeous, Puerto Rican explosives expert… well.

Sergeant Carlos Espinosa (Espi) is looking forward to shipping out and returning Stateside.  The mission he and his team have been given – that of training Djiboutian soldiers – has come to an end, and they’re heading home in seven days. It’s been a tough tour and he’s not sorry to be leaving… although he has to admit that he wouldn’t have minded spending a bit more time there if it meant he could get to know a certain CIA operative a bit better.  Kaylea Halpert is his ideal combination of beauty, brains and badass but their paths are unlikely to cross again once his deployment comes to an end.

As Espi and his team head back to camp after a day spent putting the trainees through their paces, they stop in the city to help at the site of an explosion that happened earlier that day near the UAE consulate. He’s not surprised to see Kaylea there – but is surprised when she literally throws herself into his arms and kisses him right out in the open for all to see. He guesses the reason for her unprecedented action right away – “I take it that was for the benefit of that guy in the keffiyeh who’s staring daggers at me?”– and when she asks him to accompany to her to the reception that night at Al Farooq’s brand new palace, he agrees – orders permitting – to help.

This fake relationship isn’t really fake at all.  Kaylea and Espi have been aware of each other for a while; they’re both honest about their mutual attraction and desire for one another and don’t hesitate to act on it.  While there’s a little regret on both their parts that they didn’t make a move sooner, they’re determined to enjoy their night together, as it’s all they’re likely to have.  But Carlos wants more, and tries to persuade Kaylea that they should keep in touch privately to explore the connection he knows they both feel, to explore the possibility of a future they both want; but Kaylea is reluctant, insisting that their current realities and careers are incompatible.

But it doesn’t take her long to realise that she can’t simply close the door on something she can’t deny she wants too.  She hurries to catch up to Carlos after he’s left her apartment – and is confronted with the sight of him being beaten up by three huge men.  In her rush to catch him, she’s left her phone and gun upstairs, so when she sees the men dumping Carlos in the back seat of a Jeep and driving off, she immediately jumps into Carlos’ truck and follows, determined to do whatever she needs to do to free him and get them both out of whatever they’ve stumbled into alive.

Ms. Grant packs a lot of story into a smaller-than-usual page count, but this is a worthy addition to the Flashpoint series, a quickly-moving, tightly-plotted story that will keep readers on the edge of their seats as Kaylea and Espi uncover a tapestry of lies, treachery and betrayal designed to completely wreck the already fragile diplomatic relations between the US and the various governments in the region – and race to put out the fires.  As is the case with all the books in the series, the author’s research is impeccable and she imparts relevant and interesting information without resorting to dry-info dumps.  Kaylea is a kick-ass heroine of the best kind; she’s intelligent, frighteningly competent and does what needs to be done regardless of how little she may actually want to do it; and Espi has her back all the way. Of course he doesn’t like the idea of the woman he’s falling for going into danger, but he admires and respects her abilities and talents; he knows she can handle herself and doesn’t try to stop her doing so. Both of them know their best chance of success is to work together – and they do that spectacularly well.

The shorter length does mean that the romance develops rather quickly, but that’s often the case in romantic suspense novels given that the leads have to work in really close proximity over short spaces of time. The fact that Kaylea and Espi have fancied each other from afar for some time helps establish the connection between them, although it’s a fast progression from that to ILYs.

That quibble aside, however, I was really pleased to be able to spend some more time in this world and with these characters. Inferno is a great way to get your fix of thrills, action, adventure and romance in one small – but perfectly formed – package.

ETA:  The audio version, narrated by the ever fabulous Greg Tremblay is terrific; the way he injects real emotion into his performance goes a long way to making those fast-ish ILYs completely believeable.