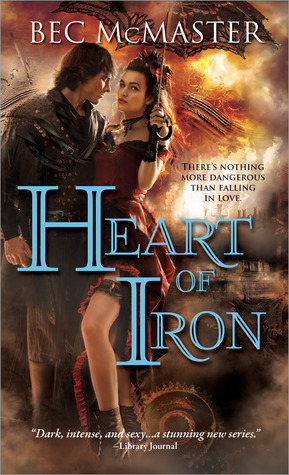 In Victorian London, if you’re not a blue blood of the Echelon then you’re nothing at all. The Great Houses rule the city with an iron fist, imposing their strict ‘blood taxes’ on the nation, and the Queen is merely a puppet on a string…

Lena Todd makes the perfect spy. Nobody suspects the flirtatious debutante could be a sympathizer for the humanist movement haunting London’s vicious blue blood elite. Not even the ruthless Will Carver, the one man she can’t twist around her little finger, and the one man whose kiss she can’t forget…

Stricken with the loupe and considered little more than a slave-without-a-collar to the blue bloods, Will wants nothing to do with the Echelon or the dangerous beauty who drives him to the very edge of control. But when he finds a coded letter on Lena—a code that matches one he saw on a fire-bombing suspect—he realizes she’s in trouble. To protect her, he must seduce the truth from her.

With the humanists looking to start a war with the Echelon, Lena and Will must race against time—and an automaton army—to stop the humanist plot before it’s too late. But as they fight to save a city on the brink of revolution, the greatest danger might just be to their hearts…

Bec McMaster has created a detailed and original world for her London Steampunk series, a steam-powered but recognisable version of Victorian London that is populated by humans, mechanoids and blue bloods and ruled over by the Echelon.  When I reviewed the first book, Kiss of Steel, I gave a brief outline of the London Steampunk world, so I won’t repeat that here; I’ll assume that if you’re reading this review you know what blue bloods, mechs and verwulfen are and what the Echelon is (and if you don’t, just click on the link above to find out. Or better still, read the books!)  Although each novel features a different central couple, there’s an overarching plot running throughout the series, which means it’s helpful to read them all in order – and there are likely to be spoilers in this review.

Heart of Iron is the second book the series, and it takes place about three years after the events of Kiss of Steel. In that book, we first met the Todd siblings – Honoria, Lena and Charlie – and Honoria, who had worked alongside their scientist father as he attempted to find a cure for the Craving Virus found her HEA with Blade, a rogue blue blood who has made an empire of his own among the rookeries of the East End.  Honoria’s sister Lena never felt at home in the Warren (as Blade’s home is known); not scientifically minded in the way that Honoria was, she was usually overlooked at home, and was brought up on lessons on etiquette and things young ladies should know, prepared for a life in blue blood society.  When the Todds moved to the Warren, seventeen-year-old Lena became fascinated by Will Carver, the big, handsome verwulfen who was Blade’s right hand man, but when, one night, she gathered her courage and kissed him, Will rebuffed her and “he told me he would tolerate my childish little games for Blade’s sake, but that he would prefer it if I didn’t throw myself at him.”  Hurt but determined not to show it, Lena left Whitechapel shortly afterwards with the intention of making her delayed début and returning to society.  Moving into her half-brother Leo’s London mansion as his ward (Leo Barrons is the heir to the Duke of Caine, and can never publicly acknowledge his relationship to the Todds), Lena plunges herself into the social whirl, a whirl which can be an extremely dangerous place for young women like her, who are seen as easy pickings for any blue blood lord until they sign a thrall contract with one, exchanging blood rights for his protection.

But while Lena moves in that dangerous world by night, she is also determined to gain a degree of independence, and to that end, continues to produce incredibly detailed, skilfully-wrought clockwork pieces for Mr. Mandeville, the man to whom she’d once been apprenticed.  Through him, Lena has become involved – albeit peripherally – with the growing humanist movement, who want to oust the Echelon and gain the rights and opportunities they are currently denied.  Lena principally acts as a messenger, carrying encrypted messages from the humanist leader known only as ‘Mercury’ (messages she receives via Mandeville) to the humanists’ contact within the Echelon, whose true identity is also unknown to her.

Will no longer lives at the Warren either, having left the day after Lena kissed him.  He’s still Blade’s muscle, the ‘Beast of Whitechapel’, and visits regularly – although he always times his visits so that he never meets Lena there.  His rejection of her was never because he didn’t want her; he did and still does, but there’s a reason verwulfen are forbidden from taking human mates and Will has no intention of putting Lena in danger.  He was infected with the loupe virus when he was just five years old and it almost killed him; he was then sold to a travelling showman who caged and beat him and exhibited him as a freak. He refuses to risk infecting Lena or to subject her to the horrors and indignities he suffered simply for being who and what he was.

There’s a really well-conceived sub-plot in the book concerning the political manouevering required to broker a treaty between the Echelon and the Scandinavian verwulfen clans against the growing threat posed by fanatical factions in France and Spain.  Barrons asks Will if he will act as a kind of liaison and help win over the more hard-line factions in the Scandinavian party; in exchange, the Echelon will revoke the law that outlaws verwulfen and create a new one that will give verwulfen the same rights as blue bloods. Will isn’t used to mixing in political circles and isn’t comfortable with the idea, but the promised rewards are too good to pass up. He agrees to the proposal – and then asks for Lena’s help to teach him how the ins and outs of blue blood society, not because he longs to spend time with her (hah – you tell yourself that, Will!) but because it will mean he can keep an eye on her and protect her from unscrupulous predators.   Lena decides to use the opportunity to get a bit of her own back on Will, to torture him a little with her nearness and a little flirtation – only to find it backfiring as she realises she’s as desperately attracted to him as she ever was.

Having read the spin off series – London Steampunk: The Blue Blood Conspiracy – I was pleased to meet some of the characters who will play main roles in those stories, most notably Adele Hamilton, who notoriously entraps the enigmatic Duke of Malloryn (who also makes notable appearances here) into marriage.  There are also appearances by a number of the other secondary characters who move seamlessly in and out of the series; another of the things I so enjoy about this author’s work is the way she never shoe-horns in secondary characters just for the sake of it and they’re all integral to the story.

I liked both Will and Lena, although sometimes I found Lena a little too impetuous and apt to leap before she looked.  Will on the other hand… *sigh*…  is your classic big, brooding and tortured hero who will stop at nothing to keep his lady-love safe, even if it means denying himself the only thing he has ever truly wanted.  On the surface, they’re constantly at odds, but beneath, they’re a seething mass of warring emotions that neither knows how to deal with. I did wish Will had told Lena the real reason behind his rejection earlier than he does, but that’s really my only niggle.  Mostly, their romance is really well done; the sexual tension and chemistry between them burns bright and the eventual love scenes are sexy and romantic.

Bec McMaster again achieves a terrific balance between the various different elements of her story, combining a sensual romance with intriguing plotlines and memorable characters.  Heart of Iron is another terrific read and the London Steampunk series deserves a place on any romance fan’s bookshelf.