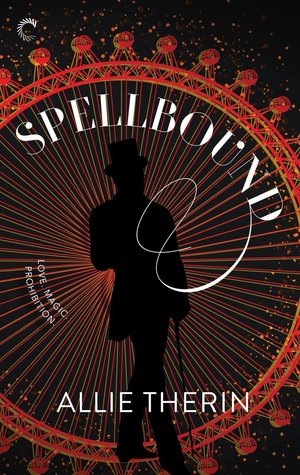 To save Manhattan, they’ll have to save each other first…

Arthur Kenzie’s life’s work is protecting the world from the supernatural relics that could destroy it. When an amulet with the power to control the tides is shipped to New York, he must intercept it before it can be used to devastating effects. This time, in order to succeed, he needs a powerful psychometric…and the only one available has sworn off his abilities altogether.

Rory Brodigan’s gift comes with great risk. To protect himself, he’s become a recluse, redirecting his magic to find counterfeit antiques. But with the city’s fate hanging in the balance, he can’t force himself to say no.

Being with Arthur is dangerous, but Rory’s ever-growing attraction to him begins to make him brave. And as Arthur coaxes him out of seclusion, a magical and emotional bond begins to form. One that proves impossible to break—even when Arthur sacrifices himself to keep Rory safe and Rory must risk everything to save him.

To save Manhattan, they’ll have to save each other first…

The synopsis for Allie Therin’s début novel  Spellbound caught my attention immediately.  Supernatural relics, powerful psychics, romance, magic and an unusual setting -1920s Manhattan – it all looked like a recipe for a great read, and for the most part, it was.  The story pulled me in right away, I was impressed by the worldbuilding, the plot is intriguing, I liked the characters, and the setting is vividly described; pretty much everything about the book works, although I had a few issues with the central romance.

Twenty-year-old Rory Brodigan is a psychometrist, possessing a unique talent that allows him to touch an object and discover its history.  More accurately, the object pulls his mind into its history and there is often a very real possibility that it may never be able to return to the present.  Feeling himself to be something of a freak – and following a scrying that went badly wrong – he’s become something of a recluse and lives with his aunt, an antiques dealer in Hell’s Kitchen in New York City.  Thanks to Rory’s talent – which they are careful to keep secret – she has built a reputation for being able to distinguish real artefacts from fake ones, which is what brings congressmen’s son Arthur  Kenzie to her shop with a rush job he’s prepared to pay handsomely for.

A veteran of WW1, Arthur is the scion of an incredibly wealthy, well-connected, New York family.  He’s handsome, well-educated, sophisticated – and lonely, taking pains to keep his relationships casual, infrequent and usually outside the US.  During his wartime service, he learned of the existence of magic courtesy of two of his closest friends – both of whom he saw die horribly – and although he doesn’t possess a scrap of magic of his own, he’s dedicated himself to protecting the world from supernatural relics that could destroy it.  He’s received word that an extremely dangerous and powerful artefact is on its way to New York, possibly into the hands of a fearsome enemy; and with it due to arrive any day, he’s racing against time to find someone with the necessary talent to be able to help him and his small band of allies to find it.  Having heard of someone in Hell’s Kitchen who has been uncannily accurate in discerning the provenance of various items, he prepares a test – a set of skilfully forged letters that he says he needs authenticated straight away – and takes them to Mrs. Brodigan’s shop.

When – unimpressed – she meets with Arthur the next morning to give him the news – all the letters are fakes – he explains he wasn’t wasting her time, but was instead assessing her suitability for another, much bigger job.  He gives her a case containing a relic packed inside a secure, lead-lined box, a ring that has defeated his associates’ attempts to assess its power or purpose  – but before he can explain, he’s called away, and leaves her with instructions not to open the box until he arrives at the shop so they can discuss it further.   It’s this relic – a ring that can control the wind – that ultimately reveals the truth to Arthur and brings him and Rory together.  Unable to resist taking a look inside the case – wondering what the rich arsehole who brought them a bunch of fake letters could possibly want this time – Rory opens the ring box, touches the relic, and is immediately pulled into a vision from which he very nearly doesn’t make it back.  Livid, he telephones Arthur Kenzie to tell him where he can stick his ring, and Arthur, realising the ring box has been opened, rushes to the shop to find out what’s going on.  Realising eventually that Rory is the psychometric, Arthur and his closest friends and allies – Jade, a telekinetic and Zhang, an astral walker – band together to protect him and his unique gift from those who would abuse it.

Rory, however, doesn’t want anything to do with them.  He’s rude and abrasive and mistrustful; life has taught him that’s the only way to stay safe, and when we learn more of his past, it makes perfect sense that he would be slow to trust – and fortunately for him, Arthur and his friends aren’t going to give up on him that easily.  He pushes them away – or tries to – at almost every opportunity, even as his attraction to the handsome and urbane Arthur grows stronger.

The story is well conceived and well executed, and the author does a fabulous job of integrating the prohibition era setting and the details of her secret magical world into it.  I enjoyed learning about the existence of relics and their power, of the use of magic for good and evil and of the prejudices facing supernatural beings in the society in which they live.  The main secondary characters are easily as interesting as the leads; Arthur’s principal allies Jade and Zhang are well-developed characters whose presence is integral to the suspense plot.  The first part of the book was a five-star read, easily, and I flew through it, eagerly immersing myself in the world Ms. Therin has created.  But somehow, the second half of the book didn’t quite live up to the first.  The plot – in which Arthur faces a devastating betrayal at the same time as he, Rory, and their allies must race to save Manhattan from spectacular destruction – is tense and exciting, but the villains were somewhat underdeveloped.  I also had a problem with the romance, because try as I might, I found it difficult to see what the gorgeous, sophisticated and world-weary Arthur saw in Rory who, while only eight years younger than him (Arthur is twenty-eight) often acts more like someone in his mid-teens than a young man of twenty.  I understood Rory’s prickly nature – his backstory is heartbreaking – and I understood Arthur’s natural instinct to protect; they do have chemistry, but Rory’s brattish behaviour goes on too long, and when he does eventually drop it, the couple goes from zero-to-sixty in the blink of an eye.  This is a series, so there was no real need for things to progress quite so quickly – and the book’s single sex scene is all build-up and then fades to black, which is a missed opportunity for relationship development.  When done properly, intimate scenes are an excellent way of showing the connection between characters, something which was sorely needed here given Rory’s trust issues and the way he treats Arthur for the first part of the book.

Despite those reservations however, Spellbound was an impressive début and a truly enjoyable read.  I liked the found-family quality of Arthur’s relationships with Jade and Zhang, and Rory’s with Mrs. Brodigan (who turns out to be a bit of a badass in her own right!), and the diversity of the cast, which felt right for the location and time period, was another big plus.  The book ends with a firm HFN for Arthur and Rory, and a clear indication that there’s more to come, so I’ll definitely be picking up book two when it comes out next year.

3 thoughts on “Spellbound (Magic in Manhattan #1) by Allie Therin”

Her Heart for a Compass
by Sarah Ferguson
tagged:
to-read