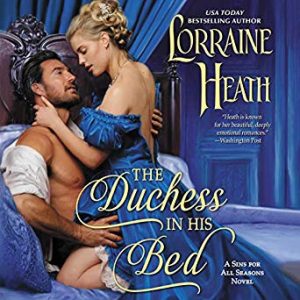 For a duchess with practical desires, falling in love is an inconceivable part of her plan…

As owner of the Elysium Club which caters to women’s fantasies, Aiden Trewlove is accustomed to introducing adventurous ladies to sin and vice. But he is uncharacteristically intrigued by the mysterious beauty who visits his club one night, yearning to indulge in the forbidden – with him. Drawn to her indomitable spirit, he breaks his rule of never becoming personally involved with his clientele and is determined to fully awaken her desires.

A recent widow, Selena Sheffield, Duchess of Lushing, has never known passion, not until Aiden’s slow, sensual seduction leads her on a journey of discovery and incredible pleasure. But her reasons for visiting the notorious club are not all that they seem.

As Selena’s motives become complicated by love, she finds herself with a most unexpected choice: forge ahead with a secret plan that could secure her future – or follow her heart which could prove ruinous.

I’ve said before that I’m a fan of Lorraine Heath’s and it’s no secret that Kate Reading is one of my all-time favourite narrators. But The Duchess in His Bed, book four in the Sins for All Seasons series was a real slog and I had difficulty getting through it. The plot is fairly simple, albeit one that presented certain ethical dilemmas, but there was so much padding that I zoned out for periods of time, and found that so little had happened during those periods that I didn’t need to rewind to catch up with what was going on.

Her Grace, Selena, Duchess of Lushing, has been recently widowed. Hers was an arranged marriage, but her husband was a good man and while she wasn’t in love with him, she did love him and is genuinely grieving for him. Or she would be, if she had the time to grieve, but she doesn’t, due to another pressing concern. She and Lushing have no children and he came from a family that was not only short-lived, but also not prolific when it came to procreation. Thus, there are no male heirs to his title or the wealth that goes with it and everything will pass to the crown, leaving Selena with a comfortable income, but not one comfortable enough to enable her to ensure her sisters make good matches. Her brother, the Earl of Camberley, spends most of his time and money gaming and living the high life, despite the parlous state of the family finances, so there will be no help for her sisters coming from that quarter. But Camberley comes up with an incredibly risky plan. If Selena can bear a child within ten months of her husband’s death, he or she will be recognised as Lushing’s legitimate heir. If the baby is a boy, he’ll become the next duke, it it’s a girl, the title will pass into escheat, but the entailment is constructed in such a way as to allow a female to inherit the wealth and lands of the dukedom and will thus retain an elevated position in society.