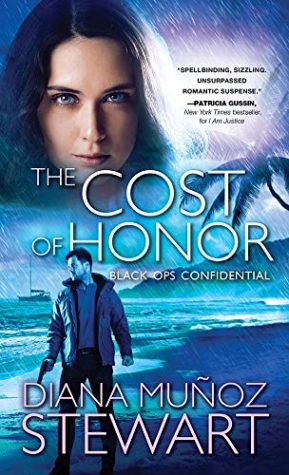 He gave up everything to escape his family

The only male to be adopted into the notorious Parish family, Tony Parish always did right by his vigilante sisters. But when an attempt to protect one of them went horribly wrong, he had to fake his own death to escape his fanatical family. Tony set sail and ended up in Dominica—face to face with the woman of his dreams…

Now he must give up Honor to save her

After the death of her mother, Honor Silva moved to Dominica, where her family could help her heal and move on. But her activist mother left her more than money, she left her proof that could take down one of the richest and most powerful men in the world.

Tony gave up everything he thought he knew when he fled his family. But when a threat too dangerous for Tony and Honor to fight on their own closes in, he has no choice but to go to them for help. Problem is, they’ll demand something in return—something that could cost Tony not just Honor, but also the love that changed him forever.

The Cost of Honor is book three in Diana Muñoz Stewart’s Black Ops Confidential series about a group of adoptive siblings (twenty-eight in total, all but two of them female) who were adopted by one of the world’s wealthiest women and trained in badassery to be warriors in her social justice crusade.  The story picks up after the end of the first book, I Am Justice, and focuses on one of the only male members of the Parrish ‘family’, Tony, who has got himself into hot water by going against orders so as to save his sister Justice from the possibly fatal consequences of her own rash actions.  Knowing the rest of the family will see this as a massive betrayal, he has only one way to keep body, soul and, most importantly, mind together; he fakes his own death to avoid being hauled back to the family HQ to have his memories altered.

Even though he’s managed to get away, Tony knows it’s just a matter of time before the family tracks him down, so he’s determined to keep moving.  Shortly after his escape, he travels to Dominica, where he (stupidly) goes kite boarding during a storm, gets wiped out and is saved by Honor Silva, a young woman who owns a cocoa farm where she manufactures high-grade, boutique chocolate and runs an island tour business on the side.

Having seen Lazarus Graves (as Tony has styled himself) is safe in hospital, Honor returns home to discover that someone has made an offer for the farm, hotel and tour business for an amount way in excess of what it’s actually worth, but she turns it down.  She has no desire to sell and besides, such an offer is extremely suspicious – why anyone would want to pay well over the odds for a business that is just about breaking even?  But when all but one of her regular tour guides fail to show for work and a number of ‘accidents’ start to occur on the tours,  it becomes clear that whoever made that offer is prepared to get their hands on the business by whatever means necessary.

The suspense plot in The Cost of Honor is intriguing, topical and moves at a good pace with clues revealed to the reader at the same time as the characters so we’re able to start to piece things together at the same time they are.  But this is (supposedly) a romantic suspense novel, and the low grade I’ve given it is entirely due to the clumsiness of the romance, which is unconvincing and contains more cheese than my favourite fondue recipe.  Even the term ‘insta-lust’ doesn’t adequately describe the speed at which things progress; Tony is in the hospital when the mental lusting starts (he’s specifically impressed by Honor’s boobs), and within a couple of days, the couple is pondering the amazing connection they share.  (Which isn’t shared with the reader – it’s all telling and no showing.)  The characterisation of Honor is inconsistent which made it difficult to get a handle on her.  When we first meet her, she’s contrasting her own cautious personality with her late mother’s bold, go-getter ways and told she secretes away her heart and her true desires.  But within  a day or two of meeting Tony,  she’s ordering him to get onto his knees and go down on her, and he’s thinking of her as a ballbuster – which just didn’t fit the initial picture the author paints of Honor as cautious and somewhat reserved.

The novel is full of clichéd dialogue and laughable statements .  I made note of many such instances on my Kindle, but here are a few of the highlights:

Tony is turned on by Honor’s driving skills:

“Honor, you catch my breath.  The way you drive.  The way you pause in the road right before a dip.  It’s like you’re one with the earth.”

In an attempt at banter worthy of any Carry On film:

“I can’t wait to get my lips around your recipes.”

During a discussion about the level of danger to Honor and trusting each other, Honor says:

“Are you sure, Laz? You barely know me.  I mean, we haven’t even slept together yet.”

And when they do get busy between the sheets, she says right out that they don’t need to use a condom because she’s on the pill and hasn’t had sex in two years.  She’s known the man for a couple of days.

And this made me laugh so hard.  After Honor gives Tony the Best BJ EVAH, he asks:

“What can I do for you, Honor? What can I do to show you… to make this moment last forever in your mind? Last for all the days that I won’t be here?”

Hm.  Now let me see.  What should she ask for?  Reciprocation? To be thrown down and taken hard and fast?  Breakfast?  Diamonds? Nah.

She asks him to DANCE FOR HER.

WTF?  I’m pretty sure the response to that request from most blokes would be “are you ‘avin’ a laugh?”

The Cost of Honor doesn’t work as a romance or as a standalone, as so much of Tony’s backstory is obviously tied to previous books in the series and the opening of the novel is quite confusing as a result.  The suspense plot is decent (ish) although towards the end, it’s overstuffed with both characters and plotpoints. But what really sinks the novel is the complete lack of romantic chemistry and the poor-execution of the romantic storyline.  I keep picking up romantic suspense novels by new and new-to-me authors in the hope of finding something to really capture my attention and sadly, am disappointed more often than not.  Give this one a wide berth.