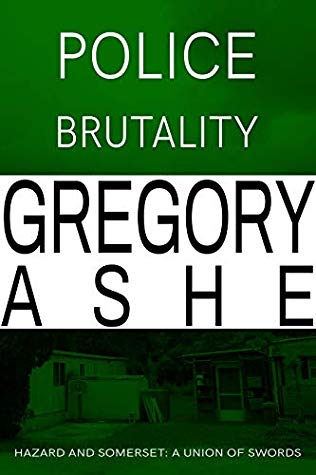 For the first time in a long while, Emery Hazard’s life is good. His new business as a private detective is taking off. Things are good at home. He loves his boyfriend, John-Henry Somerset; he loves their daughter. He might even love the new friends they’ve found. There’s only one problem: Somers has been talking about marriage.

When a former colleague, Walter Hoffmeister, comes to Hazard and hires him to look into a series of anonymous death threats, Hazard eagerly jumps on the distraction. Hoffmeister might be a jerk, but he’s a paying jerk, and Hazard isn’t convinced the threats are serious.

Until, that is, Hoffmeister is almost gunned down on Hazard’s doorstep. As Hazard investigates more deeply, he learns that more than one person in Wahredua has a reason to wish Hoffmeister dead. His search takes him to the Ozark Volunteers, reincarnated as the Bright Lights movement, but it also leads him into a sanctuary of radical Christianity. Meanwhile, an antifa activist has arrived in town, calling for Hoffmeister’s death and threatening total war with the Bright Lights.

As Hazard continues to look for answers, he becomes a target too—and not just because he’s helping Hoffmeister. The Keeper of Bees is still at large, and the killer hasn’t lost interest in Emery Hazard. Not yet. Not, Hazard begins to suspect, until the Keeper has taken everything Hazard holds dear.

I chose The Rational Faculty – the fabulous and compelling first book in Gregory Ashe’s second series of novels featuring detectives Emery Hazard and John-Henry Somerset – as my favourite book of 2019.  I’ve become addicted to the author’s brand of gritty, complex mystery combined with angsty, equally complex romance, and have been eagerly awaiting the next instalment in the Union of Swords series. The events of Police Brutality take place a couple of months after those of the previous book, and as it opens, we find Hazard and Somers a little more settled than they were and enjoying a night in with friends.

In general, things are going well. Hazard and Somers are deeply in love and firmly committed to one another, and they seem to have got past at least some of the bumps that threatened to derail things between them when Hazard became unofficially involved in a case Somers was working, which resulted in a lot of complications for Somers and put a strain on their relationship.  Now, Hazard is getting to grips with opening his own PI firm and Somers is getting used to his new partner – but as is always the case with these two, nothing is plain sailing. Hazard is still struggling to deal with his depression and the PTSD that followed the attack on him and Somers some months earlier, and this, together with the guilt he feels over the recent, gruesome murders of the sheriff’s son and his husband, and his growing suspicion that the killer is – for some as yet unknown reason – targeting him and those around him, is weighing heavily on his mind.  And this being Emery Hazard, ‘weighing heavily’ means ‘obssessing and over-thinking’.

While Somers is assigned to work the case of a trio of young female college students who have been the victims of sexual assault, Hazard is surprised to receive a visit from a former colleague, Walter Hoffmeister, who wants to hire him to find out who is behind the weird and unpleasant things that have been happening to him lately.  Shit in the mail, someone messing around in his house and car, someone following him – and finally a threatening note; his boss, police chief Cravens, isn’t taking any of this seriously, and Hoffmeister is clearly pissed off and pretty freaked out.  Privately, Hazard isn’t sure he believes the threats are serious either – Hoffmeister is brusque, loud-mouthed and obnoxious, and has recently been suspended from duty pending an investigation into an accusation of assault and battery on a suspect, so it’s not surprising he has enemies – but a job is a job, and Hazard agrees to take it on and see what he can find out.

That same evening, Hoffmeister turns up at Hazard and Somers’ home, but before he can say anything, shots are fired from a passing truck; nobody is hit, but Hoffmeister then tells Hazard and Somers that whoever was shooting at him had been following him all day and then sneaking around outside his house.  He’s adamant the right-wing Ozark Volunteers – one of whose members is the man he assaulted – is behind the threats, but they’re not the only people Hoffmeister has pissed off lately; and the more Hazard digs, the more he comes to realise that some things just aren’t adding up and that right from the start, there’s been something not right about any of it. Now he just has to work out what that something is.

While the mystery in this story might not be quite as high-stakes as the one in the previous book, it’s nonetheless fascinating and really well put together. Hazard has to make his way through a thick web of secrets, lies and betrayals in order to arrive at the truth, and is guilty of allowing his own preconceptions and prejudices to cloud his judgement, as well as of getting into serious hot water – again – with the police department when he oversteps and compromises a murder investigation, despite being warned – by Somers – to keep out of it.  Once again the pair are at odds over Hazard’s struggle to adjust to the fact that he’s not with the police any more, and – wow – these guys really know how to push each other’s buttons and twist the knife when the gloves come off.  Somers knows Hazard better than anyone and has realised that something’s eating away at him, but knowing full well that Hazard needs time to cogitate and process, has tried to give him the time and space to do that. But he can’t forget how Hazard had withdrawn into himself after their ordeal in the summer, and how he’d feared for him and their future together – and it’s killing Somers to know that Hazard is struggling and won’t open up to him.

Gah – these two are so bad for my blood pressure!

I’m in awe of Gregory Ashe’s insight and laser-sharp focus into the minds of both characters, and the relationship and character development in these books is phenomenal.  The deep, intense love Hazard and Somers feel for each other is palpable, and even when they’re proving that old adage – you always hurt the one you love (they really do say some horrible things in the heat of anger in this book) – that love is still a visceral, pervading presence on the page.  They’re getting better at communicating and have come a long way from the days when they talked and talked and said nothing important, yet clearly they still have work to do, and are prepared to do it.  I love that we’re being shown a relationship in all its warts-and-all glory; it’s real and raw and ultimately, there’s never any doubt that as long as they have each other, they can face whatever life throws at them. (And the final chapter deserves the biggest “Awwww!” ever.)

As in the previous book, Somers’ new partner, a hip, young gay detective named Gray Dulac, has an important supporting role to play in the story. He can be infuriating at times, and seems bent on making trouble between Hazard and Somers, but he’s loyal, intelligent and genuinely looks up to them – although he hides that little bit of hero-worship beneath teasing and unsubtle innuendo.  The town of Wahredua itself is so vividly depicted that it feels like a character in its own right, and many of the other secondary characters will be familiar from the previous books – which is also true of the creepy, far-right organisation Bright Lights (formerly known as the Ozark Volunteers), which continues to spew its own despicable brand of bigotry and hatred throughout the community.

Often in romantic suspense novels, one aspect of the story overshadows the other, but not so here, as Gregory Ashe achieves a perfect balance between the romantic elements and the mystery.   Police Brutality is a terrific addition to the Hazard and Somerset series, and I’m sure fans of the author’s will need no urging from me to pick it up as soon as it’s released.  If you’re intrigued by the sound of it but haven’t read the other books, then I’d recommend you start with book one, Pretty Pretty Boys, in order to get a full understanding of how Hazard and Somers have arrived at this point in their lives. While the mystery in each book is usually solved by the end (although it might also be part of the wider story arc) the relationship between the two leads is the driving force of the series and believe me, you’ll want to experience it from the very beginning.

3 thoughts on “Police Brutality (Hazard and Somerset: A Union of Swords #2) by Gregory Ashe”