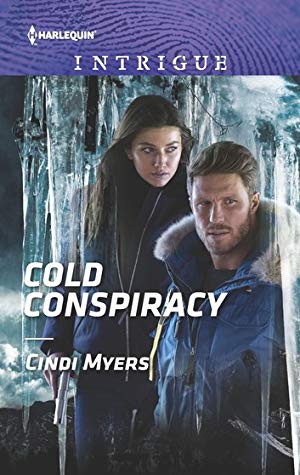 The body count is mounting.

And a deputy is the killer’s next target.

Capturing the Ice Cold Killer is the greatest challenge Eagle Mountain has ever seen. Thankfully, Deputy Jamie Douglas is determined to see justice done. Nate Hall is visiting for a wedding, and the vacationing lawman is more than willing to help. As a blizzard ravages the town, keeping everyone trapped with a killer, evidence begins to accumulate about a mysterious conspiracy. Can Jamie and Nate get to the truth before more innocent people wind up dead?

When I first started reviewing for All About Romance, I reviewed mostly historical romance – which has always been my favourite genre – and added in the odd romantic suspense title here and there for a bit of variety.  These days I read a lot more RS, although most of it is m/m, as I have found only a small number of authors (Loreth Anne White and Rachel Grant, to name but two) who can successfully (and consistently) combine both romance and suspense into a satisfying m/f story without compromising on either element. I suspect the prevalence – in m/m – of series with long running story arcs which allow for more plot and romantic development may have something to do with that, but whatever the reason, that’s my precursor to saying that much of the m/f romantic suspense I read these days isn’t particularly romantic or suspenseful, and  Cold Conspiracy by Cindi Myers is yet another example of RS-fail.

It’s the third book in the Eagle Mountain Murder Mystery: Winter Storm Wedding series, and the suspense plot centres around the search for a serial killer who is targeting young women and who leaves a calling card on each victim with the words “Ice Cold” printed on it.  I haven’t read the previous two books in the series, but in this one, the community of Eagle Mountain is cut off due to heavy snow, and while it’s believed that the main suspects in the murders had left before the roads had to be closed, the discovery of a new victim shows that not to be the case.

Sheriff’s deputy Jamie Douglas and her younger sister Donna are driving home when they come across a car stopped at the side of the road.  Jamie – who is off duty – is reluctant to stop, given there’s a murderer at large, but Donna is adamant that they must, so they backtrack and discover the Ice Cold Killer’s latest victim – the sixth – laid back in her car seat, her throat cut.

Jamie isn’t too pleased when the first person to arrive in response to her calling it in is wildlife officer Nate Hall, her high-school sweetheart and the man who, seven years earlier, broke her heart when he left Eagle Mountain to go to college elsewhere.  Now he’s back, he makes it clear that he still cares for Jamie and would like, at the very least, to be friends, but Jamie rebuffs his attempts to engage her on anything other than a professional level. After her parent’s deaths a few years earlier, Jamie has devoted herself to looking after Donna – who has Down Syndrome – and to her job, and isn’t willing to risk her heart, knowing it would be too easy to fall for Nate all over again if she doesn’t try to maintain some sort of distance.

The search for the Ice Cold Killer spans the series, so there’s no resolution to that storyline in this book, although there is progression in that the identity of the perpetrator has been discovered by the end, ready for things to be wrapped up in the next one.  But any feeling of suspense that the author attempts to create is completely destroyed by the way she telegraphs every single development, so there is no tension and absolutely nothing comes as a surprise.  Jamie, supposedly a well-trained law-enforcement professional doesn’t think to call in the license plate of the victim’s car, and on at least one occasion blushes and fights to “keep her voice steady” when speaking up in a meeting to put forward her views and ideas – one of which is to use herself to bait the killer, so yeah, maybe she should have felt a bit silly suggesting that one.  And Nate is just… there.  A few hours after finishing the book, I can’t think of a single thing about him that stood out, and all I can remember about him is his name and that he spends most of the book on crutches after an ankle injury, which seemed a really odd choice for a hero in a romantic suspense novel.

And the romance? Isn’t.  Jamie does a complete U-turn, from being very stand-offish and wanting to have as little to do with Nate as possible to: “I know if I turn my back on these feelings – if I don’t give us this chance – then I’m going to regret it” and jumping into bed with him.  Huh? What feelings?  I didn’t observe any feelings whatsoever other than her being snippy with him at pretty much every opportunity. There’s no build-up, no relationship development and no chemistry between them whatsoever.

I wanted to mention the portrayal of Donna, who is nineteen years old and high-functioning.  One of the things the author does well is to show Jamie’s struggle with her instincts to protect Donna from everything while also knowing that she’s an adult and needs to have a degree of independence.  I can’t say how accurate or otherwise Ms. Myers’ depiction of Donna is though.

I realise that authors don’t always have a say in their book titles, but surely, If you’re going to call a novel Cold Conspiracy, then shouldn’t there actually be some sort of conspiracy in it? That’s another thing that’s missing, as is any kind of clear motivation for the Ice Cold Killer, or any feeling of menace surrounding them.  With wishy-washy characters, no suspense and no romance, Cold Conspiracy is just… stone cold dead.