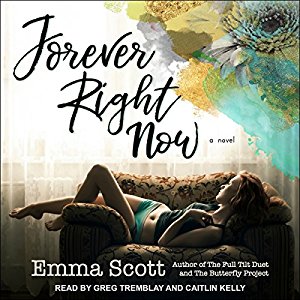 Darlene Montgomery has been to hell and back…more than once. After a stint in jail for drug possession, she is finally clean and ready to start over. Yet another failed relationship is just the motivation she needs to move from New York to San Francisco with the hopes of resurrecting her dance career and discovering that she is more than the sum of her rap sheet. As Darlene struggles in her new city, the last thing she wants is to become entangled with her handsome – but cranky – neighbor and his adorable little girl….

Sawyer Haas is weeks away from finishing law school, but exhaustion, dwindling finances, and the pressure to provide for himself and his daughter, Olivia, are wearing him down. A federal clerkship – a job he desperately needs – awaits him after graduation, but only if he passes the bar exam. Sawyer doesn’t have the time or patience for the capricious – if beautiful – dancer who moves into the apartment above his. But Darlene’s easy laugh and cheerful spirit seep into the cracks of his hardened heart, and slowly break down the walls he’s resurrected to keep from being betrayed ever again.

When the parents of Olivia’s absentee mother come to fight for custody, Sawyer could lose everything. To have any chance at happiness, he must trust Darlene, the woman who has somehow found her way past his brittle barbs, and Darlene must decide how much of her own bruised heart she is willing to give to Sawyer and Olivia, especially when the ghosts of her troubled past refuse to stay buried.

Sawyer Haas is a law student in his early twenties who works hard and plays hard.  In the middle of a party at the place he shares with a few other guys, he is literally left holding the baby when a woman he hooked-up with a few months earlier turns up on his doorstep, presents him with a warm bundle she says is his daughter and then leaves.  Sawyer may be young, and bringing up a child alone was certainly not something he’d ever envisaged doing, but it’s pretty much love at first sight, and after a few days with Olivia, he realises he can’t do anything else.  He makes huge changes to his life; he moves out of the shared house and devotes his life to his studies and his daughter.  For ten months, he juggles those two things, focused on his goal of having his name added to Olivia’s birth certificate so that she’s legally his, something he can petition for after she’s been with him for a year and there’s no sign of her mother coming back for her (which is his deepest fear).  He’s a devoted father and Olivia is well and happy when Darlene comes into their lives like a breath of fresh air.

Darlene Montgomery has moved to San Francisco from New York intent on making a fresh start.  Three years earlier, she had overdosed, and later, served three months in prison for drug possession.  She’s cleaned up her act, but has found it hard to shake off the past in a place where everyone she knows is aware of what happened and always looks at her as though they’re expecting her to go off the rails again.  Darlene wants to get out from under the weight of those negative expectations, to put the past behind her and doesn’t want any reminders of the woman she was then to impinge on the new life she wants to create for herself.

Darlene and Sawyer don’t hit it off at first.  She’s open and friendly, but Sawyer is reserved and tightly wound as well as naturally cautious about strangers around Olivia.  But living in the same building it’s impossible to avoid one another completely, and gradually they get to know one another and start falling for each other.  For Sawyer, Darlene is everything light and carefree he’s missing in his life of responsibility, and Darlene is completely smitten with the caring, passionate man she occasionally glimpses behind Sawyer’s stoic, but exhausted exterior.  The chemistry between the pair is electric, and the author builds the romantic tension between them extremely well; their first kisses are hot and sweet and intense, and we’re left in no doubt that these two very different people care deeply for one another.

Both characters are likeable but flawed, and while it’s easy to see the Black Moment coming a mile off, it’s also easy to understand why Darlene is so eager to keep the details of her past screw-ups from Sawyer.  The trouble is, she’s so focused on her fresh start that she fails to take into account the importance of owning her mistakes and remembering them so as to learn from them and not make them again.  And Sawyer, whose eidetic memory is undoubtedly an asset given the pressures he’s under, is someone who sees things very much in black and white; he’s brilliant, but he struggles to see the grey areas, to account for human frailty when it comes to the law – and that inability could threaten not only his career, but the life he’s making with Olivia… and the one he’d hoped to make for the both of them with Darlene.

I didn’t expect to get quite so sucked in to this story, but the characters, plot and narration were so appealing that I found myself listening at every opportunity.  Greg Tremblay is an incredibly talented narrator and one I listen to frequently, but Caitlin Kelly is new-to-me, so I admit to a little trepidation before I started listening.  I needn’t have worried however, because she delivers a really strong performance that more than holds its own.  Both narrators differentiate clearly between the various characters and both are able to voice characters of the opposite sex convincingly and consistently throughout.  Their vocal acting is superb and they don’t hold back when it comes to the heightened emotion of some of the later chapters; I was on the verge of tears when it seemed Sawyer’s world was about to come tumbling down and could feel Darlene’s heart breaking when she thought she’d lost everything she ever wanted.

Forever Right Now is an emotionally charged story that tugs at the heartstrings in the best way.  The relationships – especially Sawyer’s with Olivia – are really well written, and the romance is just the right amount of sexy and sweet.  The superb narration is a real bonus; if you’re into audio, that’s definitely the way to go for this one.