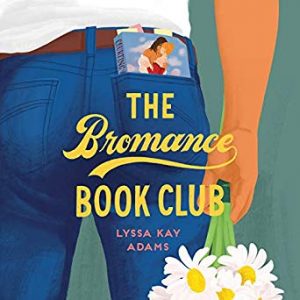 The first rule of book club:
You don’t talk about book club.

Gavin Scott’s marriage is trouble. The Nashville Legends baseball star has recently discovered a humiliating secret: his wife Thea has always faked the Big O. His reaction to the revelation is the final straw for their already strained relationship. Thea asks for a divorce, and Gavin realizes he’s let his pride and fear get the better of him.

Welcome to the Bromance Book Club.

Distraught and desperate, Gavin finds help from an unlikely source: a secret romance book club made up of Nashville’s top alpha men. With the help of their current read, a steamy Regency called Courting the Countess, the guys coach Gavin on saving his marriage. But it’ll take a lot more than flowery words and grand gestures for this hapless Romeo to find his inner hero and win back the trust of his beloved wife.

There was quite a bit of pre-publication buzz about The Bromance Book Club, and the synopsis – a guy woos his wife with the help of romance novels – sounded intriguing, but I’d be lying if I didn’t say that what really prompted me to pick it up for review was the name of the main narrator, whose alter-ego is a very well-known, very popular and extremely good narrator of contemporary romances.

Baseball star Gavin Scott has been happily (as far as he knows) married to Thea for three years. They dated only briefly before they married after discovering that their twin girls were on the way, and have settled into their lives as parents and partners, a life in which Gavin’s job sees him frequently away from home and oblivious to the effect his absences and the demands his profession make on Thea are having on their marriage. Things come to a head one night when Gavin learns that Thea has been faking orgasms for practically the entirety of their marriage; he takes it really badly and, furious and upset, moves into the guest room before leaving the house the next day and holing up in a hotel.