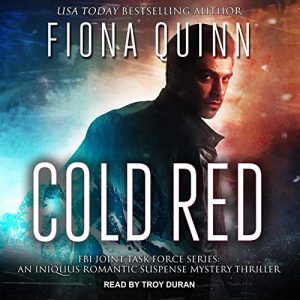 Undercover. Under fire. Under arrest….

It’s hard to save a special agent’s life with your hands cuffed behind your back.

Anna walks into the house and is met with flashbang. The FBI have her cuffed and belted into the back of their car. Two FBI agents are escorting her over the mountains of West Virginia heading to Washington, DC, for interrogation….

She was never meant to get there alive.

Flying off the side of the icy road, a car crash is Anna’s chance to escape and survive. It would be so much easier without her special forces code – no man left behind.

I chose to review Fiona Quinn’s Cold Red – book two in her FBI Joint Task Force series – because I’d really enjoyed book one, Open Secret, which I found to be a fast-paced and compelling thriller that kept me pretty much glued to it from start to finish. FBI Joint Task Force is a mini-series that falls under the author’s wider Iniquus World of “high stakes national security” (so says Ms. Quinn’s website), but although there are recurring characters who appear or are namechecked, both of these books work fine as standalones. But just to be contrary, I was a little bit disappointed that Cold Red isn’t related to Open Secret by plot or character; I’d so enjoyed the main plotline in that book that I’d hoped for more.

Anastasia Senko – Anna – is a former army ranger and current member of the Asymmetric Warfare Group, and is deep undercover as part of her mission to find out who is behind the technology being used to disrupt US military satellite communications in Syria and Iraq. The AWG has reason to believe it’s coming from Slovakia; specifically from computers belonging to the powerful Zoric family (which has links to the Russian FSB), and Anna’s facility with the Slovakian language means she’s been sent to infiltrate the Zoric family to gather intelligence. Her most recent assignment for the Zorics is to babysit Johnathan, a wealthy social-climber looking for an “in” with the Russians, who is also funding a supremacist militia group, the Southern Iron Cross.