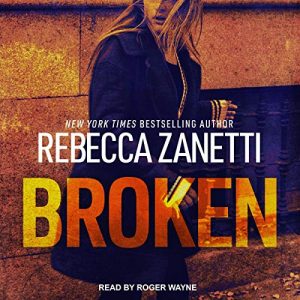 This title may be downloaded from Audible.

Former Navy SEAL Clarence Wolfe’s unit was taken out with a land mine. Injured and devastated, he hasn’t been quite right since. Worse, the tragedy was no accident. All Wolfe wants now is to take down the man responsible. In the meantime, he’s good with being the muscle for the Deep Ops team – and leading a steamy no-strings-attached personal life. Until one intriguing woman changes everything…

Reporter Dana Mulberry is on a mission to avenge the death of a fellow journalist. She’s finally hot on a trail – right to a sex club – where she runs into…Wolfe? It seems both their leads have led to the same spot. To keep from blowing their covers, they’ll have to at least pretend to have a little fun. Trouble is, they genuinely like each other. And that’s way too risky for Wolfe, especially when, to his surprise, Dana agrees….

Drawn to each other in ways they can’t understand, Wolfe and Dana keep it professional – until they’re shot at one night. And when their adventures land them both at the heart of corruption in DC – and at odds in their missions – they’ll have to dig deeper than ever to succeed in their quests – and with each other….

Rebecca Zanetti’s Deep Ops series featuring the members of a small, out-on-a-limb branch of the Homeland Defence Department continues with Broken, the third full-length novel in the set. Each book in the series is a (mostly) self-contained story but there’s also an overarching plot concerning the search by Angus Force – the head of the group – for the serial killer he supposedly shot and killed five years earlier. Everyone but him believes the man to be dead, and Force’s obsession with proving otherwise is what essentially derailed his FBI career and saw him sidelined into setting up a rag-taggle group of agents who get their hands dirty when the Bureau can’t afford to. Force’s plotline gains a little traction here – and I believe his story is next up in the series – but Broken is firmly focused on the somewhat eccentric former SEAL Clarence Wolfe and investigative reporter, Dana Mulberry, who found herself in the wrong place at the wrong time in the last book, Fallen, when she was kidnapped, and then rescued by Wolfe. There was a definite zing of attraction between the pair in that book, and in this one, they team up when they discover they’re both hunting the same bad guy – albeit for different reasons.

This title may be downloaded from Audible

Too quiet. A talented hacker who got caught; Brigid Banaghan is now forced to work with a secret deep ops unit. But she won’t reveal any more to these renegade feds than she has to. Especially not to Raider Tanaka, her control freak of a bodyguard and handler. It’s enough that his body is tensed for action and his heated gaze is always on her….

Too sharp. Raider knows there’s more to his new assignment than he’s been told. Why send a deadly agent of his experience to guard a computer genius – even a gorgeous, unpredictable, undisciplined one? But when Brigid’s estranged father is named in an investigation into Boston’s organized crime, Raider’s mind switches onto high alert, just like his senses…

Too close. To clear her father’s name, Brigid needs Raider’s help. The unit’s idea that she bring a straight-laced fed in as her “fiance” won’t fly, though-not unless Raider can release his inner bad boy and become the rebel Brigid can’t resist…

I had a few reservations about the love story in Hidden, the first book in Rebecca Zanetti’s Deep Ops romantic suspense series, but I enjoyed Roger Wayne’s narration sufficiently enough to want to give the series another try. There’s a novella –Taken – that comes between Hidden and Fallen (the second book), but I didn’t feel as though I’d missed anything by not reading or listening to it; in fact, Fallen works pretty well as a standalone.
In Hidden, the author introduced listeners to a small and out-on-a-limb branch of the Homeland Defense Department headed up by FBI agent Angus Force, a charismatic but obviously damaged individual whose personal mission – to find the serial killer he supposedly shot and killed five years earlier – turned into an obsession that pretty much derailed his career. He’s been sidelined and tasked with setting up this small unit which is going to end up doing the jobs the bureau doesn’t want to dirty its hands over. The rag-taggle group of agents he’s assembled includes former cop and undercover specialist Malcolm West, hacker Brigid Banaghan, FBI agent Raider Tanaka, former Navy SEAL Clarence Wolfe and department shrink Nari Zhang. Oh, and let’s not forget Force’s booze-loving German Shepherd, Roscoe. They’re a quirky, engaging bunch, and the author has developed strong relationships between them that clearly go beyond the professional; they like and respect each other even if they don’t always show it, and their banter and snark is well done.

Hide. That’s all Pippa can do to escape the terror chasing her. But now that she’s off the grid in a safe house, she finds plenty of interesting things to watch through the window. Like her new neighbor, with his startling green eyes, killer smile, and sexy bad-boy tattoo . . .

Run. Malcolm West is fleeing the hell he unleashed in his last assignment as an undercover cop. A backwoods bungalow sounds like the perfect place to start over. Until he discovers he’s been set up . . .

Fight. Someone’s gone to a lot of trouble to bring them together. No matter how much he resents that, and his own driving needs, Malcolm will have to dig deep and let loose the banished killer inside himself, or Pippa’s fears could come true faster than the flip of a bolt in a lock . . .

Hidden is the first book in the new Deep Ops series of romantic suspense novels by Rebecca Zanetti, an author whose work I’ve not yet read or listened to. The series features the somewhat rag-taggle group of hand-picked operatives who make up the newly created Requisition Force (and yes, we do learn the reason behind the name!), a branch of the Homeland Defense Department.

Former cop Malcom West spent much of his career working undercover and acquired a reputation for being the very best at what he did. But years spent living that way have taken their toll, and his previous assignment, during which he became close to someone he was then forced to kill, was the straw that broke the camel’s back, and he retired from the force, intending to spend some time dealing with the emotional fallout of that situation, regrouping and deciding what he wants to do next. As part of that plan, Mal has purchased a new house in a quiet neighbourhood – and has absolutely no idea that he’s been skilfully manoeuvred into moving in next door to someone who is suspected of having links to an organisation planning a terrorist attack.

Ten Things I Hate About the Duke
by Loretta Chase
tagged:
to-read