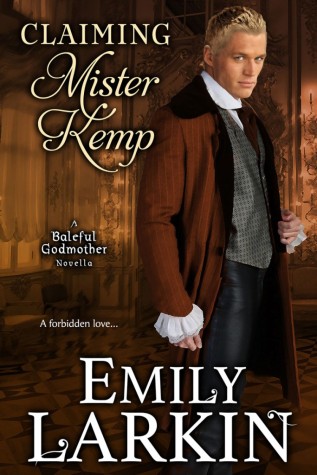 Lucas Kemp’s twin sister died last year. He’s put aside his mourning clothes, but not his heartache. If Lucas ever needed a friend, it’s now—and who should walk in his door but Lieutenant Thomas Matlock…

But this time, Tom’s not going to ignore the attraction between them. This time, he’s going to push the issue.

Claiming Mister Kemp is a long-ish novella that is the fourth story in Emily Larkin’s Baleful Godmother series.  While characters from the previous books make brief appearances, it’s perfectly possible to enjoy this as a standalone – although the other three books are excellent and well worth reading.

Lucas Kemp and Thomas Matlock have been friends ever since their first term at Eton, even though their backgrounds couldn’t be more different.  Lucas comes from a wealthy background and a warm, loving family, whereas Tom, the youngest son of an earl, was born to parents who really couldn’t be all that bothered about him, and his fondest childhood memories are of the holidays he spent at Whiteoaks, where he and Lucas made a foursome with Lucas’ cousin, Letty Trentham (Trusting Miss Trentham) and his twin sister, Julia.  The four children were close, although as twins, Lucas and Julia shared a unique bond.  They remained close as they grew into adulthood, but eventually their lives took them in different directions, with Tom going into the army, Letty and Julia entering society and Lucas inheriting an estate of his own.  But some sixteen months before this book opens, tragedy struck, and Julia was killed when she fell from her horse.  Everyone was devastated at her death, but for Lucas, it’s even worse than that.  He feels as though he has lost something of himself, and although his mourning period has ended, he continues to miss his sister intensely.  He puts on a good show for those around him, fooling those who don’t know him well, or don’t care to look beyond the surface, but inside, he’s a mess, having resorted for a time to taking too much laudanum to try to dull the pain and when that avenue was denied him (his valet found his stash and threw it away) took to drinking too much and too often.

Tom, now a member of General Wellesley’s staff, has returned to London with the general in order to speak at a military enquiry into Wellesley’s actions after the battle of Vimeiro.  A recent brush with death has given him a new appreciation for living and made him determined not to waste another minute of his life in denial of the feelings he has always held for his best friend.

It’s Lucas’ birthday, and Tom knows it will be a difficult day for him, seeing as it should have been Julia’s birthday, too.  He goes to Lucas’ lodgings intent on offering comfort and support, only to find his friend drunk and alone in the dark.  His heart breaking for Lucas all over again, Tom decides to seize the chance to show Lucas that he is not alone, and that his – Tom’s – feelings for him go beyond friendship. When Lucas, his inhibitions and defences lowered, doesn’t refuse Tom’s advances, they share a brief moment of sexual intimacy.

Afterwards, Lucas is utterly horrified and disgusted at what happened, and tries – unsuccessfully – to avoid Tom the next day.  But Tom won’t allow him to ignore what happened between them, and pushes Lucas to acknowledge the truth of his own feelings as well as the strength of the attraction between them.  As his anger with Tom lessens, Lucas finds it harder and harder to resist the pull of that attraction and allows his long suppressed feelings for his friend to come to the fore – although once their moment of shared passion is over, he is once again overwhelmed by his thoughts and his fear of discovery and being labelled a sodomite.

Given that homosexuality was punishable by imprisonment (or even death) at this time, Lucas’ fears are well-grounded.  But this is much more than a story about a man’s reluctance to explore his sexuality; it’s also about a terribly lonely man who is so mired in grief and loss that he is in danger of losing himself, too.  Lucas has known for a long time that he’s not attracted to women and refused to admit the possibility that he was attracted to men; and the moment at which Tom realises that while he’s been away in the army, surrounded by people, having sexual relationships (with both sexes), Lucas quite literally had no-one is like a punch to the gut.

While I sometimes felt that Tom was perhaps a little too pushy, he’s redeemed by the fact that he is so patient with Lucas, allowing him to dictate the pace of their sexual relationship and to do as much or as little as he wants.  He’s funny and warm and charming, and there’s absolutely no doubt as to the fact that he loves Lucas dearly and would do anything for him.  But things come to a head when Lucas’ fears overcome him once more and he pushes Tom away for what could be the last time.

The events in this story run concurrently with those of Trusting Miss Trentham and one of the things I really liked was that we get to see the other side of some of the conversations both Tom and Lucas had with Letty Trentham in that book.  But if you haven’t read it, don’t worry – as I said at the outset, this stands on its own.

Claiming Mister Kemp is a heartfelt, compelling love story featuring two well-developed and likeable central characters. The sex scenes are sensual and well-written, conveying a real sense of the depth of the love and affection between the two men, and the emotional connection between the pair is palpable.  At somewhere around 170 pages, it’s a quick and satisfying read and one I’m recommending without hesitation.

Paris Daillencourt Is About to Crumble
by Alexis Hall
tagged:
to-read