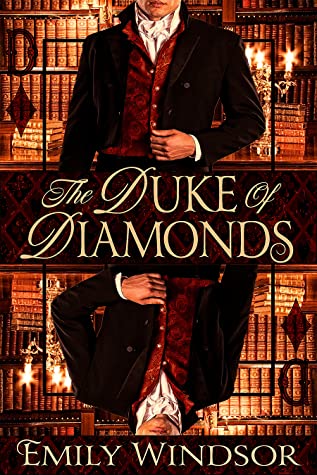 In the coldest flint, there is fire…
Casper Brook, the eighth Duke of Rothwell, has forever spurned frivolous pleasures, his restless emotions remaining buried beneath duty and command.
Yet when a titian-haired minx perches upon his ducal desk and claims to know the whereabouts of his one burning obsession, a game of wits and passion erupts…

Fire ignites from a spark…
Miss Evelyn Pearce possesses naught but a frail young sister and an ebony-black cat. Left destitute by her baronet father’s spendthrift ways, fate and talent hand her the opportunity to seek escape from the dangerous alleys of London town.
The cold Duke of Diamonds holds the key, and all Evelyn must do is resist his not-so-cold kiss…

A dance of flaming desire…
A passion forged on secrets can never be satisfied, but as guises fall and plots unravel, will the duke’s controlled façade shatter to reveal his searching heart within?

Emily Windsor may be new-to-me, but she’s not a “new” author, having already published over half-a-dozen or so historical romances over the last few years.  The Duke of Diamonds is the first book in her The Games of Gentlemen series, and while it’s nothing I haven’t read before, the writing is deft, the characters are engaging and the wryly observational humour is nicely done.

Evelyn Pearce and her younger sister Artemisia have come down in the world since the death of their father, a famed portraitist and artist who left them nothing but crushing debts.  During those three years, they’ve moved from their comfortable home to a series of increasingly less salubrious lodgings, and Evelyn has barely kept their heads above water with the money she earns from her job as a scenery painter at a local theatre.  But Artemisia is in poor health, and living in damp and dirty conditions and not being able to afford decent food is only making it worse; and the extra cost of medicine for her means they’re now in debt to an unscrupulous moneylender, who is threatening to put them to work on their backs if Evelyn can’t pay up.  In desperation, she comes up with an audacious – and potentially dangerous – plan.  She knows that one of her father’s paintings – The Fall of Innocence – was purchased by the Duke of Rothwell for one hundred pounds, and rumour has it, it’s his most prized possession.   Her father made sketches for a companion piece, but never actually painted it – so Evelyn, who learned to paint as his knee and knows she will be able to replicate his style exactly, paints the work with the intention of getting the duke to purchase it.  It’s an intensely risky plan – she could be charged with forgery should she be found out – but it’s either that or prostitution (and likely death for her sister) and with no other option, she decides it’s worth the risk.

Casper Brook, eighth Duke of Rothwell inherited his title at seventeen from his profligate father, who had run his estates into the ground and left his family practically destitute.  In the decade or so since, Casper has worked tirelessly to turn things around, and in doing so, has earned himself a reputation for being rigid, cold and ruthless. His uncle and brother are no help; Uncle Virgil is rather eccentric and his younger brother Ernest is rather wild, spending most of his time womanising, gambling and drinking – and Casper is forever trying to rein him in, worried he is following in their father’s footsteps.

Evelyn decides that a direct approach will be best, and contacts the duke’s man of business requesting an appointment.  Her first sight of Rothwell (lean, impeccably dressed and handsome as Apollo) almost buckles her knees, but this is no time to let a girlish infatuation (or unrequited lust) divert her from her purpose.  Realising that the demure persona she’d planned to adopt won’t work with someone so extremely haughty and aloof, she gathers her courage and instead tries a hint of challenge and flirtation as she tells him about the painting and invites him to view it.

Rothwell is intensely suspicious of “Mrs Swift”, but probably the one indulgence he allows himself in his life of rigid responsibility and dutiful hard work is his love and appreciation for art, and he can’t help being intrigued by the idea of the existence of a companion piece to his most treasured painting.  Half of him thinks it must be a forgery; the other half really hopes it isn’t;  finding himself –  reluctantly – as intrigued by the messenger as he is by the message, he agrees to attend the viewing some days hence.

As I said at the beginning, there’s not a lot new here, but it’s a well-paced and entertaining story, the characters are engaging and well-rounded, and the sexual tension and chemistry between Evelyn and Rothwell is intense and delicious.

To start with, Rothwell seems to be one of those rather stereotypical starchy heroes who needs a metaphorical kick up the arse to get him to live a little, but  as the story progresses and we get to know him better, we see the man beneath, the man with a kind heart who locked his emotions away in order to deal with the enormous burden he had to shoulder and who has, even though he no longer needs to be that man, caged his true self away for so long that he’s forgotten to allow himself to enjoy his life. I loved his eccentric Uncle Virgil – who steals the few scenes he’s in! – and the way Rothwell is brought to see the error of his ways with Ernest (even though that does happen a bit quickly) and to understand that by trying to exert control over his brother, he’s in danger of losing him altogether.

Evelyn is an admirable heroine who only resorts to deception when she’s out of options.  Their battle of wits is full of wit, charm and, at times, blunt honesty; one of my favourite exchanges is the one where Evelyn angrily accuses Rothwell of being a typically lazy aristocrat and he parries by telling her exactly how hard he works for everyone who depends on him (not a response I’ve seen all that often in HR.)

I did have a few issues with the story, however, the main one being the wobbly premise.  Evelyn could have sold her painting to anyone in order to get the money she needed to enable her and Artemisia to leave town – there were other people interested besides the duke.  The other thing that really bugged me was the cursing; not because I’m a prude (we Brits swear a lot and I can swear like a trooper!) but because it was just so… silly.  The phrasing may well be authentic, and some was undoubtedly funny, but it was just too much and quickly became annoying, and I also found it difficult to buy that Evelyn, who was brought up as a lady, would so far forget herself as to use slang/swearwords to a duke.  Ms. Windsor’s style is readable and breezy, although I couldn’t help feeling as though something was missing – I just can’t put my finger on what.

Ultimately, The Duke of Diamonds was an enjoyable read with an interesting plot, likeable characters and a good dose of humour and sensuality.  I’m on the fence as to whether I’ll read Ms. Windsor again, but this book was a good way to pass a few hours on a grey afternoon.

Who Cries for the Lost
by C.S. Harris
tagged:
to-read