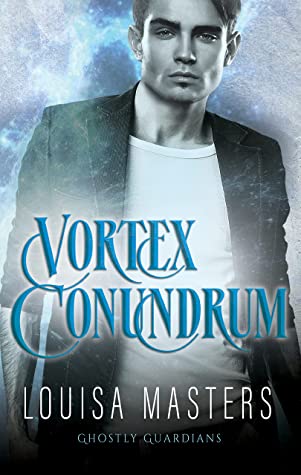 After years managing a haunted hotel and estate, I thought things were good. Sure, the ghosts can be a handful—nosy, opinionated, interfering—but they’re also friendly and fun. We have a system. Everything was under control.

But after a minor blip with a demon in the basement and a vortex to the spirit world, the ghosts swear they have no more secrets. The danger is gone, and we’ve done everything we can to make the vortex safe. It should be fine. Nothing’s come through it for fifty years.

Lucky for us, the demon expert we met online is willing and able to help us out. I’m so grateful, I’d willingly kiss his feet. Until he arrives and opens his mouth.

Connor is… a jerk. But he’s a sexy jerk who’s doing us a favor, so I’m going to be polite no matter what. Even when he makes me mad. When he flirts hard. When the roof falls in and we have to share a bed. When we realize the vortex upstairs is just the beginning.

Suddenly, Connor’s real strengths shine. Beneath the smoking hot yet annoying surface is a heart of gold, and I don’t think I can hold out against it… or that I want to.

Vortex Conundrum, the second book in Louisa Masters’ Ghostly Guardians series, picks up a few months after the events of Spirited Situation, and I really would advise reading that first if you plan on reading this one. It’s an easy read, but it’s very insubstantial in terms of both plot and characterisation.

Please note that this review contains spoilers for the previous book.

The Ghostly Guardians series takes place at the Mannix Estate in Illinois, an old country house that is now a museum and re-enactment centre that is reportedly “haunted as fuck”. In Spirited Situation, we learned that the friendly ghosts who live there have been guarding a kind of portal – they call it a vortex – to the ‘otherworld’ (where all the nasty spirits and demons come from) for the last fifty years, ever since a guest summoned a demon which subsequently killed her. At the end of the book, Josh – a medium and one of the leads in the story – fought and vanquished a soul-eating demon that had found its way through the vortex. The ghosts now keep a round-the-clock watch on the vortex and have done the best they can to stop anything from crossing over; but then Skye, one of the hotel receptionists, is possessed by an unknown entity that clearly managed to make it through.

At a complete loss as to what to do next, Josh makes contact with the guy he’d been in touch with before when they had to fight the soul-eater, someone he’s found on the internet who clearly knows a lot about the supernatural. The guy – Connor – asks a lot of questions and explains to the stunned Mannix crew that he’s a paranormal hunter/troubleshooter. He concludes that Skye is a conduit, someone with a strong connection to the spirit world, and says he’ll be there in a few days to see what he can do.

Something about Connor rubs Kieran, the estate manager, up the wrong way from the moment they meet. Keiran thinks Connor is arrogant and condescending, Connor thinks Kieran is too tightly-wound and can’t resist pushing his buttons. But arrogant or not, Connor clearly knows what he’s doing, expelling the demon he calls a body-hopper from Skye easily and then insisting on being taken to the gateway he’s sensed up in one of the guest rooms. Kieran and Josh realise they can’t keep the vortex a secret any longer; Connor explains to them that while the ghosts have done a decent job of trying to stop anything coming through, they’ve been lucky until now.. The measures they’ve taken aren’t enough to stop it happening again, and there’s no guarantee that whatever comes through next will be as easy to deal with.

So far so good. I liked the author’s explanation of the purpose and workings of the soul, and was intrigued by the idea of The Collective – an organisation dedicated to safeguarding the Earth from the dangers of the otherworld that’s been around for more than a millenuim. The trouble is that it’s all conveyed through lenghty explanations and info-dumps.

As I said in my review of the previous book, the author has an engaging writing style that’s easy to read, the setting is interesting and the characters are likeable – but on the downside, there’s no real depth to them, the romance is superficial and there’s very little plot. Connor being a member of The Collective means he knows just about all there is to know about just about every supernatural entity in existence and how to combat it, so there’s no tension, no finding out stuff alongside the characters and never any real sense of peril. There’s one tiny moment near the end when we find out that Connor is capable of making a mistake, but, eh, blink and you’ll miss it. I also had to do a double take when, in the middle of trying to hold off an unexpectedly powerful demon he has to RUN OUT TO HIS CAR to get something! Dafuq??

I breezed through the book in a few hours, but I spent most of it waiting for something dramatic to happen – and it doesn’t. In a story about ghosts, demons and supernatural entities, I’d have expected some chills and spooky moments, a climactic battle between good and evil and an epic conclusion. There’s none of that here.

Vortex Conundrum is pretty bland, with a lacklustre romance and very little plot. I probably won’t be continuing with the series.

Who Cries for the Lost
by C.S. Harris
tagged:
to-read