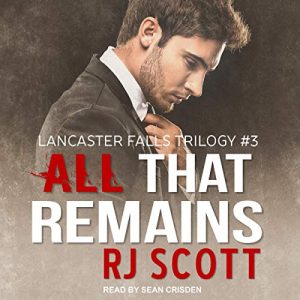 Federal Agent Lucas Beaumont has an agenda – get himself assigned to the case of the apparent serial murders at Lancaster Falls, find out who the murderer is, and then lay the ghosts that haunt his grandfather to rest. In the midst of a horrific murder investigation, the only peace he gets is from simple moments in a warm kitchen, talking to hotel owner, Josh. Attraction to the easygoing man is something he didn’t expect; in doing so, he opens himself to hurt, but at the same time, he begins to fall in love.

Josh is struggling to keep the Falls Hotel, even with every cent he has invested in its upkeep. The one thing keeping him above water is the not entirely legal work he does on the side – a steady income that not even his son knows about. When the FBI takes over his hotel for the duration of the Hell’s Gate serial killer case, Josh is faced with the real possibility that Lucas will not only discover his secret but also steal his heart.

When tragedy hits Josh and his son, and when it seems all hope is lost, can Lucas rescue them both?

All That Remains is the third and final book in RJ Scott’s series of romantic suspense novels set in the small Pennsylvania town of Lancaster Falls, and it neatly wraps up the overarching mystery storyline begun in What Lies Beneath and continued through Without a Trace. Even though I was disappointed with both the story and narration in the latter book, I decided to listen to All That Remains in hopes that Without a Trace had been suffering from middle-book-itis, and that the series finale would be a stronger listen. Plus, I wanted to find out whodunit!

The series has an overarching plot, so if you still like the sound of it after reading my reviews (!) then this isn’t the place to start. There are spoilers for the previous books in this review.

The discovery of several sets of human remains in a sink hole in Lancaster Falls leads to speculation that one of the bodies is that of Casey McGuire, a young man who went missing a decade earlier, and whose disappearance is still felt keenly by all in the community. The previous book (Without a Trace) focused on the investigation as to whether or not Casey was one of the murder victims and who might have killed him; All That Remains picks up the story shortly after the events of that book, when an FBI team headed by Special Agent Lucas Beaumont arrives in the town to work the investigation into what looks like a string of serial murders of young women.